We had a great time at the Coates Hire Ipswich 400 over the weekend with our BIG Performance Competition winner! Our Falken Performance Ambassadors Scott McLaughlin, Nick Percat and the Hit and Run Drift Boys joined us to show our winners Brett and his dad John a great time.

The Hit and Run Drift Club boys were on track early Friday morning, where Scott McLaughlin took the opportunity to give the lads a tour. Where was plenty of car talk and swapping stories going on.

As part of the BIG Performance prize, Brett and John were treated to a Hot Lap with Scott McLaughlin and Nick Percat, a Drift experience with the Hit and Run Drift Club, VIP Corporate Hospitality in the V8 Supercars Paddock Club, Grid Walk and Pedders Safety Car Ride.

It was a great weekend had by all, with the Hit and Run Drift Club showing off their skills around the track and BIG Performance prizewinners Brett and John enjoying their motorsport filled weekend!

Solid day for our @HHARacing team. P11 in race 1 and P7 in race 2. #coateshire400 pic.twitter.com/dfyYwJCq8Z

Nick Percat and Scott McLaughlin performed well, with Nick placing 11th and 7th throughout the weekend in Race 1 and 2.

Although facing some car issues, Scott McLaughlin managed to race well and says his car will go under some tests before the next race at the Sydney Motorsport Park 400. While it was the major talking point of Race 24, Scott played down his unlucky encounter with Michael Caruso who tried to overtake him for the lead and ended both their chances of winning.

BIG Performance at the Ipswich 400 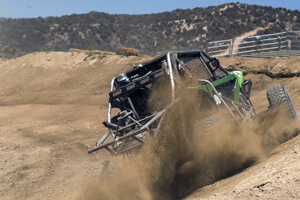 Falken WildPeaks Put To The Test In LA Falken Welcomes their new Performance Ambassadors to the Team