The exciting evening was also highlighted by the first win by Team Falken driver Piotr Wiecek and the second-place finish of Falken veteran Daijiro “Dai” Yoshihara, who was a crowd favourite. Wiecek was named “Rookie of the Year” as a result of his performance. It was the sixth event win for Falken tyres out of the total eight rounds.

It was standing room only at Irwindale Speedway, which has historically hosted the final event – the “Title Fight” – of the Formula Drift season. Reluctantly, this will be its last as the popular Southern California oval track will close permanently in January 2018. The enthusiastic audience showed their appreciation for the drivers and the results long after the drifting battles had ended.

“I can’t believe what a fantastic season this has been,” exclaimed Deane. “Since the age of 10, it’s been a childhood dream to be able to compete in the sport of drifting. I’ve been so fortunate to have such a great team and great support from Falken with its superb tyre, the AZENIS RT615K+.”

“It’s been such a tremendous honor to represent all my sponsors, friends and fans here in the U.S. and to compete against some excellent drivers this year,” Deane, who hails from Ireland, continued. “I’m on a cloud right now. To be able to have my family here – my mum and my father – my number one fans – my brother, Mike, and all the Irish fans who came to this event to support me, as well as all those back-home watching, thank you! I’m also so appreciative to the Worthouse Drift team. This year has made me so happy to claim this trophy and bring it back to Falken.”

Falken’s drivers were strong all season long and dominated at their home track of Irwindale. Deane came into the House of Drift just 96 points ahead of Fredric Aasbo who was in second place. However, Wiecek sent Aasbo home in the Top 8, ending any chance he could challenge Deane for the overall championship. Wiecek eventually had to face off against teammate Yoshihara to take the win for the night.

“This is a great night for Falken,” said Wiecek humbly, who qualified second overall. “I’m extremely pleased to win, but am just very happy for James as he’s proven all year long that he was the man to beat. He clearly had such a focus on that championship. And now that he’s earned his, next year will be mine.”

“On behalf of all of our drivers this season, I’m very proud of their accomplishments and thank them for their strong efforts,” said Jonathon Bradford, Falken’s Motorsports Marketing and Events Manager. “With the rich history that Falken has with ‘The House of Drift,’ to be able to come out of this event with the results we achieved is one for the history books.”

“Naturally, our goal all season has been to earn the championship,” Bradford continued, “and seeing James Deane hoist that trophy for the driver’s championship and Piotr Wiecek, Dai Yoshihara and James all standing on top of the podium tonight, this was what we came to do. And it’s a really good feeling.”

Falken also earned the Tire Cup Championship as a result of the team’s performance at Irwindale, the second year in a row.

“While this has undoubtedly been one of the most successful seasons Falken Tyres has had to date, this event is also a bit bittersweet,” admitted Steve Wong, Falken’s Supervisor, Passenger Car Events, “Because this is the last time we will compete at Irwindale. The track, its staff, the fans, they’re incredible. Everything that has happened here over the years has been seared into our memories so we can remember just what a great place Irwindale has been and what it’s meant to Falken. What we’ve done solidifies the fact that the Falken AZENIS RT615K+ provides the consistency, grip and confidence our drivers need to succeed.” 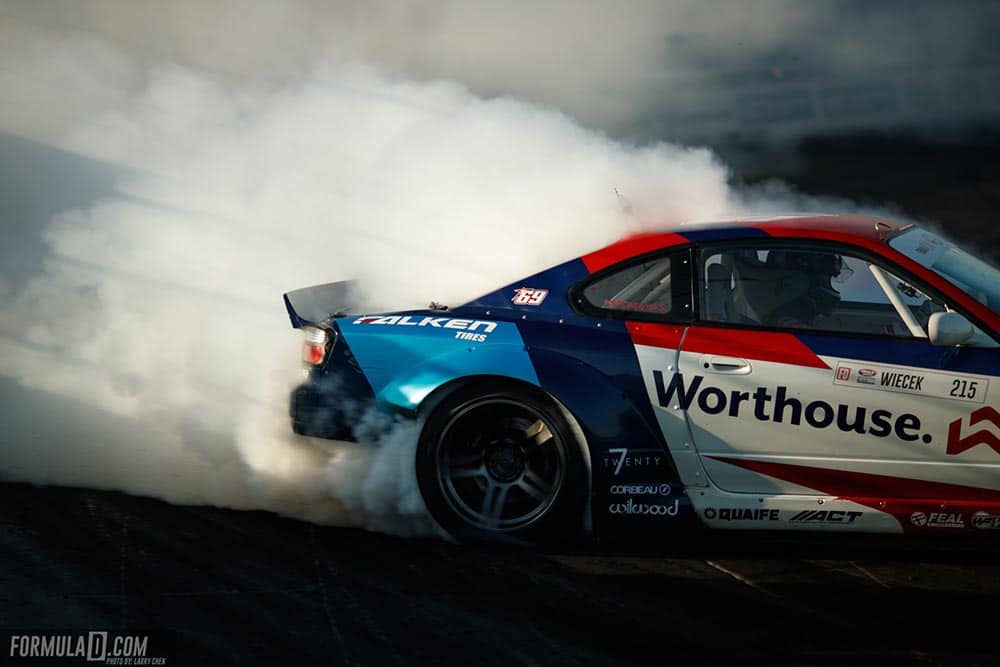